Okay, I haven’t finished my book, so this isn’t a review because I don’t have anything to review yet. In my defense, Bleak House is an especially looooong book, and somehow Dickens doesn’t read as quickly as George R.R. Martin. I’ll probably finish by the end of the year. (I guess now’s the time to write my big end-of-the-year post, anyway. Which I skipped last year. I know.)

So. Since it’s taking me a long time to read this behemoth, and I haven’t posted in a while, I figured I’d offer a Christmas update (in the last half-hour before Doctor Who makes me cry. But that’s neither here nor there). So here goes. And since this post will be mostly photos (and thus very long), I’ll add a Read More here…

The biggest news is that WE BOUGHT OUR HOUSE! Meaning that we bought the house we currently live in and which Palmer has lived in for 15 years. It’s so exciting, except that I wouldn’t wish the mortgage-getting process on my worst enemy. And here’s our house! It’s a little splotchy right now because we had to scrape and prime some (okay, lots of) peeling paint. Now, we have to power-wash it and paint it for realz. We’re going back and forth between a light goldy yellow and mint, both with red shutters, white trim, and a red door. Also: say hi to Mr. Pig and admire Palmer’s expert Christmas-decorating job! 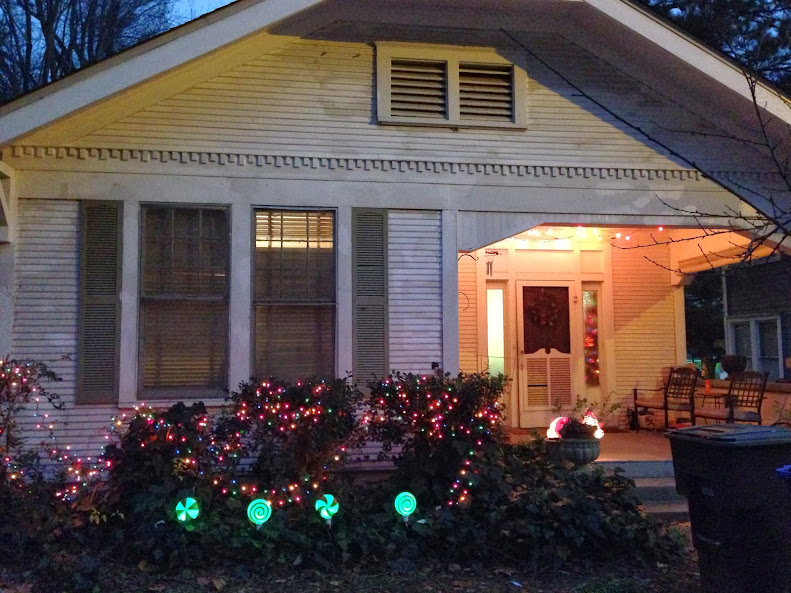 We also made that super-cool ornament you see at the top of the post. I found it on Pinterest, and it seemed perfect, as we signed the house papers a week before Christmas.

Aaaand since it’s the holiday season, there has been much baking in our house. I use my gingerbread cookies as an annual test of my KitchenAid mixer’s wellbeing. I’m really surprised it works so well.

Palmer and I always have fun cutting out and decorating cookies.

We delivered them to our families with much fanfare.

Finally, there are, of course, presents. In a previous post, I showed you the scarf I crocheted for Palmer. That was his major gift. I also got him a Pocket Hose, which was terrifically exciting. As he got his present early, I didn’t feel terribly about accepting mine early, though, in my mind at least, mine is much more spectacular. What could it be, you ask?

Why yes, I do, indeed, have the best husband. I’ve been a fan of e-readers for years now, and now that Kindles and Nooks are front-lit, tablets have the advantage of not getting nicked. One tiny scratch in a Paperwhite or a Nook with Glowlight, and you’re annoyed for ages. A glass screen doesn’t get damaged so easily, though there is the little reflection problem. The main issue I had with my 3rd generation iPad is that it’s so big and heavy, but the iPad mini solves that while combining any e-reading platforms I might want to use. Now that’s exciting.

My second favorite present appears at the opening of this next video, showcasing the cats’ present, which they’re lounging upon rather than playing with. Ahh, cats.

Anyway, I hope your Christmas was at least half as exciting as mine. That said, I’m glad it’s over now.