I don’t even know where to begin with this one, except that, strangely, The Master and Margarita is what I expected The Magus to be, and vice versa. I hadn’t read anything by (or even heard of) Mikhail Bulgakov before The Master and Margarita, which I think might have been another Goodreads recommendation. I think the devil-causing-mischief idea intrigued me. I’m not sure why I waited so long to read it since it’s been on my list for a while.

At the most basic level, here’s what happens: the devil goes to Moscow and causes mischief. It’s also a political satire about society in the Soviet Union and its relationship to religion. Jesus and Pontius Pilate make an appearance, along with various fun demons and a shape-shifting black cat named Behemoth. I thought this book was supposed to be magical realism, but it’s pretty hardcore fantasy and is similar to Faust. There isn’t quite selling-of-souls, but there’s talk of selling-of-souls, and there’s an afterlife judgment-of-sorts. The devil likes some people and doesn’t like others, and the latter come to often grotesque (but, really, just) ends. Those he likes come to ambivalent(?) ends. It’s a really complex book almost in the form of a fairy tale. The demonic characters are great – and strangely hilarious.

Note the almosts and the not-quites. Again, I’m not sure what to do with this book. As soon as I finished it, I wanted to read criticism about it to get an idea of what other people think about it, but that just allowed me to procrastinate: writing this post isn’t as easy as it seems it should be, and since I’m writing this for pleasure (okay, so I don’t forget everything about this book), I’m not going to analyze. I just read the Wikipedia article.

So. I’ll say that The Master and Margarita is a winner and that it provokes thought. It’s a fun romp through Moscow and the Underworld (did I mention Satan’s ball? No?). There’s broom-flying and cat-shooting. Good times are had by all. There’s also Pilate’s guilt over allowing Jesus to be crucified and the…interesting end of the title characters, who I didn’t even mention in my not-quite-summary. Which all means that you should definitely read it, but plan to spend some time afterward thinking about it. You might not know what to do with it, either.

A quick search, by the way, reveals some pretty awesome covers:

It also reveals that Behemoth is the best character.

This second section of blog posts has become a photo-scrolling activity. I look through the photos I took while I was reading this book and post a few because it’s nice to remember, and I won’t otherwise. That, and this is a blog about books, not so much about other things. Anyway. Here’s what I did while I read The Master and Margarita:

According to my camera roll, I ate lots of things and fought with my blood sugar. In that order.

Palmer and I finally made it to Twisted Root Burger Co. We tried a few times right after it opened, but the line was always out the door, so we went elsewhere. A week or two ago, it wasn’t, so we went in. Here’s what we got:

Mine was on the left: a basic bacon cheeseburger with caramelized onions and no fries. Palmer’s is a hamburger salad. He liked his better than I liked mine, which was something, I guess, because neither of us were impressed. The meat was super-processed and tasteless. We won’t be going back.

Otherwise, since Palmer has been home so much (he usually is around the holidays), we’ve been running around working on house stuff. You’ve seen (an early version of) our library results. We also changed our Friday-night hangout because Ivan’s got too loud and full of d-bags. Our new bar is so much better.

And, finally, I made my first king cake in almost two years. It was glorious. 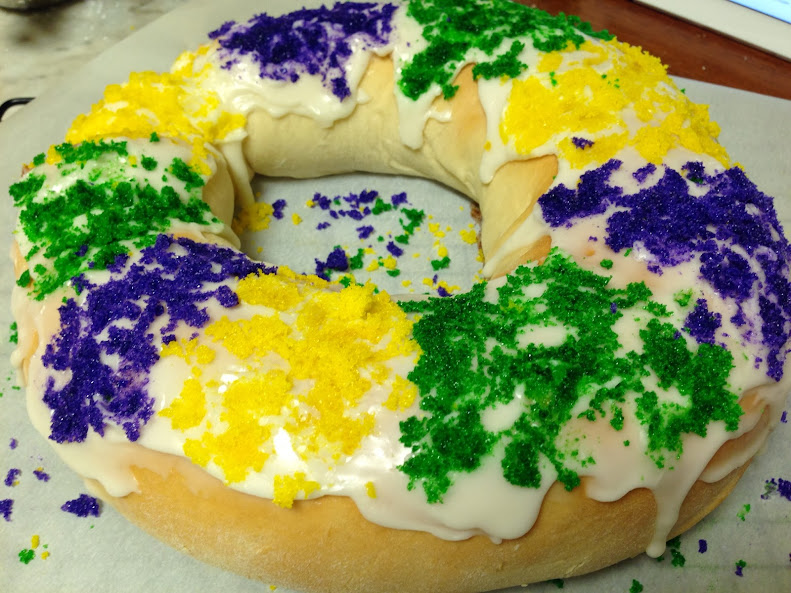 That probably won’t be the only one I make this year. If only I could eat twelve pieces instead of one.

And maybe I should mention that I darkened up the text on this page just a bit. While I love this theme, it seemed a bit hard to read.

I finished The Master and Margarita a few days ago, and now I’m about a third into A Bloodsmoor Romance by Joyce Carol Oates. While it’s really, really good, it’s taking me forever to read.

Oh! I should also note (are we at the P.P.P.P.S. level, yet?) that The Master and Margarita is the first book I’ve read toward the Roof Beam Reader’s 2014 TBR Challenge. That’s 1 of 12, if you’re playing along. (Here’s a link to my page and my original post.) Not a bad start.