Here’s how I ended up reading A Bloodsmoor Romance: I was browsing through Amazon’s Kindle deals, saw this book, and clicked on it because I’d never read any Joyce Carol Oates, and I figured that I should have by now. The Accursed came out fairly recently, so her name has been floating around. Speaking of floating, it’s Amazon’s description that I couldn’t resist: “When their sister is plucked from the shores of the Bloodsmoor River by an eerie black-silk hot air balloon that sails in through a clear blue sky, the lives of the already extraordinary Zinn sisters are radically altered.” It was the balloon that doomed me, as the description further explains that it’s a Victorian-style gothic novel published around 1980. I was intrigued despite the fact that my history with Victorian novels is spotty at best. At 771 pages, it’s also a bit hefty to fit into my 50-books plan. But I couldn’t resist.

So you’ve got the five sisters and the balloon part and the gothic Victorian part. That should give you some idea of what goes on here. There’s also the fact that it’s set near Philadelphia in the couple decades before 1900, which adds another twist. That said, as in a traditional Victorian novel, all five girls, of noble birth, need to be married off to eligible bachelors. Except they’re all smart and headstrong, and things don’t go quite as planned – or at all as planned.

It’s what you’d expect from a Victorian novel, but oh so much more exciting! There’s all kinds of craziness usually never even alluded to in those novels and expressed here with an amusing (though ultimately excessive) maidenly reluctance. Even the one sister who behaves as she “should” ends up in quite an… interesting marriage situation, though, of course, she never mentions it and is too naïve to even think that it isn’t normal. Ahh, the Victorians!

Two things (mildly) annoyed me about this book: of course, since Oates wrote this book sometime in the late 1970s, she had to make it feminist, and it’s so in-your-face that it seems excessive at times. And A Bloodsmoor Romance is loooooong. About halfway through, I realized that it feels longer than Bleak House, though I know that’s not the case. I was even bored at times, though the book is still good enough that I rated it the full five stars on Goodreads. Oates means for it to be so long because it’s a parody of Victorian novels, and its longness is even funny at times, for instance, at the 84%-mark, when it seems like things should be winding down:

[box type=”shadow”]In any case, the authoress’s solemn task being, then, to mediate between contour, and detail, I am bound to confess that, as my Bloodsmoor history draws to its appoint’d close (not many seconds before the initial stroke of midnight, of December 31, 1899), I find myself the more beleaguered, by all that, for purposes of brevity, I must omit: by all that enthralling multitudinousness, of weeks, days, hours, and minutes, which the Zinns experienced as their lives. Ah, to omit – to be forced to omit! – so very much: to awake in the midst of the night, my poor head ringing, and clattering, and clamoring, with the vociferous demands of a dream-double, of Samantha, or Mrs. Zinn, or Charles Guiteau, or the Baron, or Pip, or “Mark Twain,” or Little Godfrey, or “Malvinia Morloch” that was, or “Deirdre of the Shadows” that was! – to the effect that, I have not done the complexities of their souls justice, and, in shaping them to the contours suggested, or by a labyrinthine profusion of others’ lives, I have, in fact betrayed them, who entrusted their beings to me.[/box]

You get the point, and, as you can see, there is nothing brief about this novel. That said, it’s so worth the hours and hours you’ll spend reading it. That’s if, of course, you don’t absolutely hate the likes of Jane Austen or the Brontë sisters, as I thought I did before I broke down and read Pride and Prejudice several years ago. If nothing else, A Bloodsmoor Romance makes fun of them, so you can enjoy your hatred that way (much like, as Palmer says, I go to Starbucks to be angry at people).

And there’s a huge bonus! A half-hour after I started reading this book, I read the Goodreads description, which says it’s part of a five-book saga, ending with The Accursed. I almost stopped reading this one and picked up the first, Bellefleur (which is also discounted heavily on Amazon), when I decided that I was already too interested to put it down. I liked A Bloodsmoor Romance so much that I’ll be reading the rest of them in short order. I’m now a huge fan of Joyce Carol Oates.

According to Goodreads, it only took me nine days to read, though it seemed so much longer. I guess I haven’t really done much other than sit around with the cat and read (how attractive that sounds!). Here I am doing just that:

After a long stay in Shreveport, Palmer is out of town again. He’s currently working on a Youtube video about visiting a statue of Vulcan and a smelting mill near Birmingham. Here he is with said statue. I hope he’s having a good time. 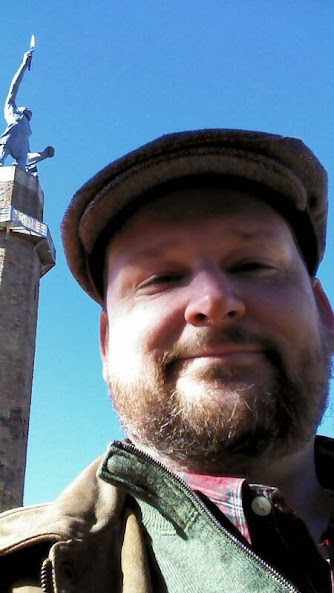 Next, I’m forcing myself to read a short novel. All these long novels are addictive. How did I not take the plunge earlier?