I wanted so badly to like Under the Net, but until I hit about the 80% mark, I didn’t. Not at all. It’s another case of inability to like a novel if I don’t like the protagonist, as in Madame Bovary and Anna Karenina. If I can’t relate, I’m not interested.

Which was entirely the case here. Under the Net about Jake Donaghue, a thirtyish-year-old man who refuses to accept any responsibility, and a you’re-too-old-for-this-crap Bildungsroman. Through most of the novel, he frolics around London, living off of his friends and taking advantage of everyone and everything. He thoroughly enjoys himself. Somehow, everyone he knows doesn’t hate him even though he seemed to me like the most irritating person ever. He’s in love with a girl but isn’t willing to accept responsibility for that, either, so he runs off on his merry way. A couple of years before, he’d stayed in a hospital-of-sorts, where he was intentionally given colds and, sometimes, cures, where he met Hugo. They had all sorts of philosophical discussions, and Jake wrote a book about it and took all the credit. He spends much of Under the Net chasing Hugo around, trying to figure out exactly how angry he is. It’s all silliness until that last 20%, when Iris Murdoch makes sense of all the mischief and brings the novel together beautifully.

Under the Net isn’t the first book I’ve read by Murdoch, and, based on the others, it wasn’t what I was expecting. A few years ago, before the blog, I read and loved The Unicorn. Later, I blogged about The Bell, which was also fantastic. Both of those novels are serious, and I thought I’d be in for more of that. But no! Most of Under the Net seems more like an Evelyn Waugh (who I also love) novel like The Loved One, which is highlarious. Most of Under the Net is, too, though I spent most of it being irritated at Jake for being such a flippant idiot with zero consideration for anyone around him. There’s even an entirely ridiculous scene in which Jake and his friend break into a rival’s apartment and steal his movie-star dog. This novel is crazy.

It’s also a good example of why I need to get over whether or not I like the protagonist. Maybe, as I’ve gotten older, I’ve gotten lazier. When I was in college, I thought of most novels as a challenge, and now, reading is pure recreation. After finishing Under the Net, I see why Murdoch did what she did and why that makes it a fantastic novel, but I had no interest while I was actually reading it. (In my defense, I did do that with Madame Bovary and Anna Karenina and still hated them.) Here, I didn’t exactly spoil my experience, but I would have enjoyed it more if I hadn’t decided that I hated the protagonist and just sped through it. Lesson learned? Probably not.

So. Here’s what I think about Under the Net: it’s beautiful and absolutely fantastic. I’ll have to read it again and be a little more forgiving of Jake – even though he’s about thirty and should know better. If nothing else, it’s worth reading to see the variety of which Murdoch is capable. I have a few more of her books at home, and now they’ve moved way up on my to-be-read list. Speaking of, Under the Net is book #4 toward Roof Beam Reader’s 2014 TBR Pile Challenge. I’m well on my way!

In other news, I happened upon quite the kitteh battle last Friday:

Aaaand I bought a bunch of king cake babies. Whatever might I do with them?

Finally, here’s a blurry picture of our house slowly being torn apart for a renovation. That’s original transom glass that a previous owner walled in. We should have a new door next week! 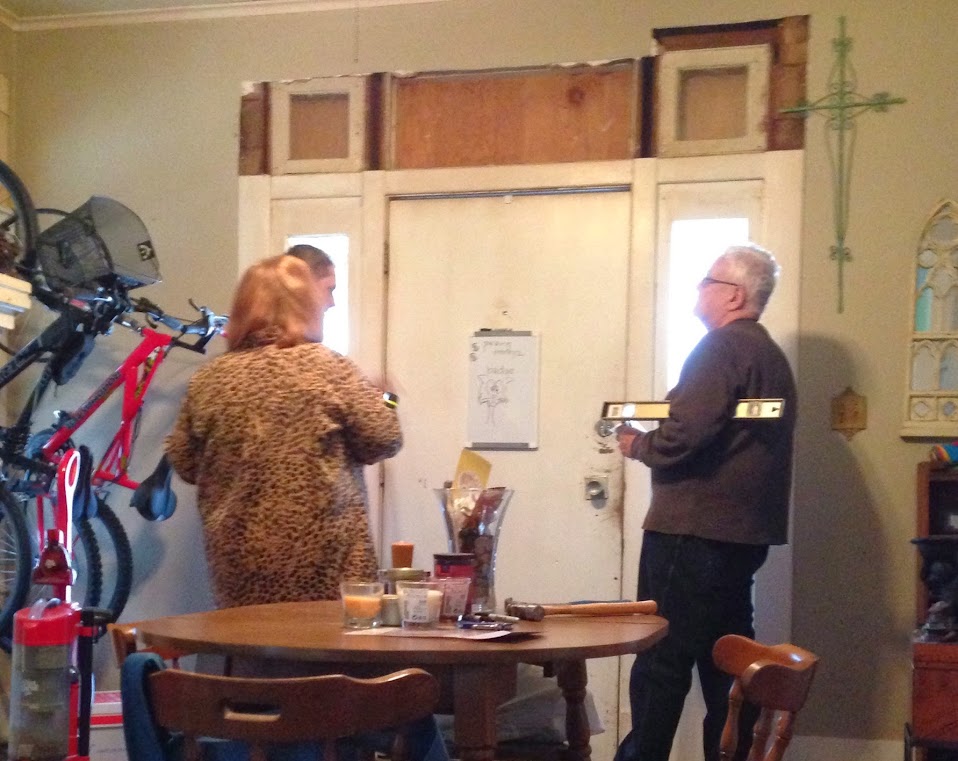