I didn’t know what to expect when I finally picked up The Goldfinch –  except a good novel. Every review I’ve read has been good. It’s been on my list for several months, ever since it was published, but it was languishing on my tl;dr list: it’s almost 800 pages long. That said, I’ve enjoyed long novels more than short ones lately,  and after alternating between lengths, I decided that It Was Time.

And oh, man. The beginning of The Goldfinch is amazing. Theo, a 13-year-old kid whose father has run off loses his mom in an art museum bombing in New York. The scene blew my mind: he was in trouble at school, and before a parent-teacher meeting, he and his mom were wandering through a new exhibit. His mom went to another gallery to see a painting, and boom! the world came crashing down around them. Donna Tartt‘s pacing through this scene is unbelievable. I was immediately hooked, convinced I would need therapy after this book. After the explosion, Theo crawls out of the rubble after being given a ring by a dying old man. He also grabs a small painting off the wall because the man had been pointing at it. It’s the titular Goldfinch. Theo makes it home, expecting his mom to arrive at any minute. She never does, and he eventually learns that she was killed in the explosion. He stays with an old friend in the city and things are going well when his dad shows up and takes him to Los Vegas. There, Theo meets Boris and gets into drugs, alcohol, and petty theft. He ends up back in New York after a few years, haunted by the explosion and his various addictions. Things Continue to Happen.

The Goldfinch is a big novel with a big plot, and it took me a long time to read. I loved it until about the 60% mark, when Theo is back in New York, eight years later, and is into some shady dealing. I was bored for a while, and once things picked up and got all gangstery, I lost interest and just wanted to finish. In the space of 100 pages, or so, this novel went from Exactly My Kind of Book to Not My Kind of Book at All. I was so disappointed. I’m not a fan of drugs and violence or of thrillers, in general.

That’s not to say that this isn’t a good book. Until I hit that point, I was convinced that it would be one of my favorite books ever. The drugs and violence just turned me off. It’s really well-written and worth the huge chunk of time it takes to read, but I’ll file it under Meh because it just isn’t my thing.

While I was reading this mammoth book, Palmer and I celebrated our second anniversary by going to Superior’s Steakhouse and Eating All the Things. We had a great time. 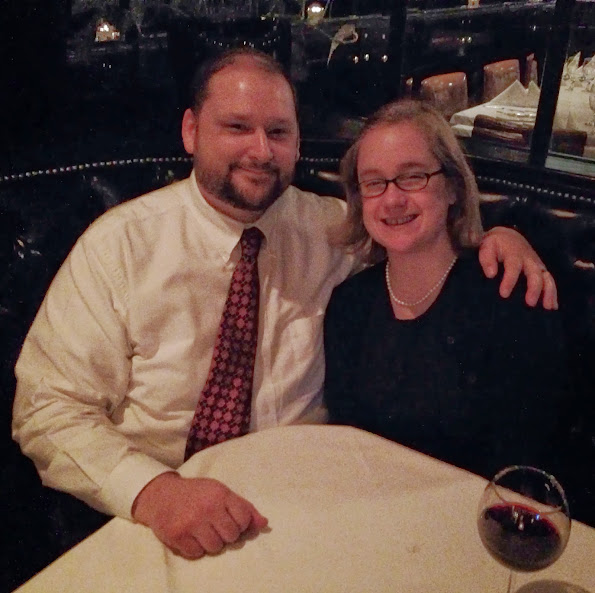 Aaaaand Palmer got the kittehs a kitteh massager because Shakespeare likes to rub his face on everything. I sprinkled a little catnip on it.

I finished The Goldfinch in a hotel in Dallas, where I’d gone to spend the weekend with Palmer. On the way there and back, I listened to E.L. Doctorow read his new novel, Andrew’s Brain, which I’ll talk about next.