2014 Book #9: The Ladies of Grace Adieu and Other Stories

An official challenge does so much for my determination! This is at least the third time I’ve tried to get into Susanna Clarke‘s post-Jonathan Strange & Mr. Norrell short story collection, The Ladies of Grace Adieu. I’m not sure why, as I loved that novel so much, and these stories revisit that world.

I think my problem was with the titular story itself: I just couldn’t get into it. It’s my least favorite in this whole collection. “The Ladies of Grace Adieu” is about ladies who practice their own sort of magic and meet Jonathan Strange. That’s about all I remember. Maybe reading it in a laundromat didn’t help. Next is “On Lickerish Hill,” possibly my favorite. It’s basically a Rumpelstiltskin story, in which a girl’s mother tells her future husband that she can spin five spools of flax a day. He marries the girl, but he says he’ll kill her if she doesn’t do that every day of the twelfth month of her marriage. She makes a deal with a fairy and can only avoid being whisked away by guessing his name. Then there’s “Mrs. Mabb,” which is fantastic. The same Mab of Romeo and Juliet lives in Faerie and causes all kinds of trouble for the protagonist. “The Duke of Wellington Misplaces His Horse” is great, too. The setting is near the wall in Neil Gaiman’s Stardust (I love that book!). A duke’s horse ends up on the Faerie side of the wall, and the Duke goes in after him, meeting a woman weaving his fate into a tapestry. It’s brilliant. “Mr. Simonelli or the Fairy Widower” is about a rector who meets an evil fairy and tries to save five sisters from marrying him. “Tom Brightwind or How the Fairy Bridge Was Built at Thoresby” is about a man who befriends a fairy and the mischief that happens when they wander into a small town. A bridge is built. Yes, indeed. “Antikes and Frets” is about Mary, Queen of Scots’s, hatred of Queen Elizabeth and her attempts at killing the latter. Short but glorious! The last story, “John Uskglass and the Cumbrian Charcoal Burner,” returns directly to Jonathan Strange and Mr. Norrell with a tale about John Uskglass getting tricked by a poor working man.

These stories are fantastic. It’s unfortunate that I just couldn’t get into the first one and was held back from reading the rest of them for that reason. They make me wonder about Susanna Clarke’s future novels: it seems like her brain is permanently trapped in Faerie, and I’m not sure that she can write a different novel that doesn’t turn into some sort of sequel or prequel. I almost hope she doesn’t prove me wrong because I would love to revisit her version of Faerie in an entirely new, gigantic novel.

While I was in Dallas, Palmer and I went to IKEA to get a new bookcase to replace some old, saggy ones and a kitchen cart for some extra room since we now have a laundry room(!). Somehow, Palmer fit everything into his car and then into my car.

When I got home, I had a friend come over to get the boxes into the house, and I put the shelf together. I’m rather proud of myself because it definitely qualifies as a two-person job. 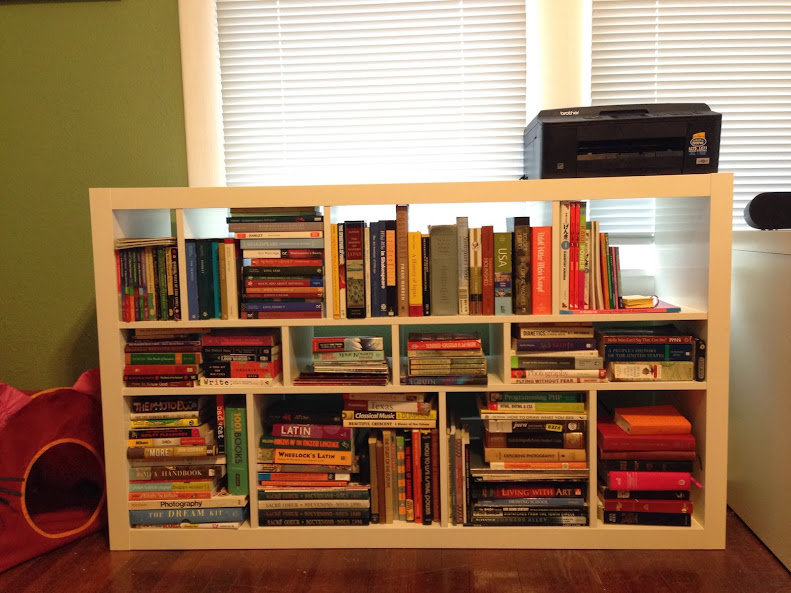 I love my library so hard.