I’m not sure how Italo Calvino made it onto my radar or, even, which of his books I read first. I vaguely remember copies of Mr. Palomar lying around my high school, but I didn’t read it until much later. I certainly wasn’t assigned him in college (as I wasn’t assigned Borges…). I haven’t even read that many of his books. Going down the list in Goodreads, it looks like it’s only been Invisible Cities (possibly my first?), If on a winter’s night a traveler, Mr. Palomar, and The Castle of Crossed Destinies – and, now, Cosmicomics, which I hadn’t even heard of until I spied it on a friend’s bookcase a few weeks ago. The first two and the last of these are my favorites, though I don’t recall ever reading anything by Calvino that didn’t amaze me.

Compared to the list above, Cosmicomics is like… well, none of them, except that it’s as Calvino as any of them. Which, I guess, sounds a little strange. It’s a collection of short stories about the creation and evolution of the universe and is even more vast than it sounds. All of the stories are beautiful and fantastic, but I’ll only mention my three favorites. The first story, I think, is the best: “The Distance of the Moon” is about a moon very close to the earth, so close that a ladder will reach up to it. It’s drifting away, though, as time passes, and it is eventually far enough away that it can no longer be reached at all. There’s a love story, of sorts, involved, in which a boat with several young men, a captain, and his wife, harvest food from the moon. The captain’s wife falls in love with one of the crew, but when she realizes that said crew member only loves the moon, she strives to be just like the moon. There’s also “The Dinosaurs,” in which a race of dinosaurs is almost extinct except for one, who joins a colony of “New People” who don’t realize what he is. He falls in love with one of them and wants them to know what he is, though they are afraid of what they think are dinosaurs. There is jealousy and violence, and the dinosaur has trouble finding acceptance. He learns about why the dinosaurs decided to disappear. Finally, there’s “The Spiral,” about a (blind) mollusk who also falls in love and creates a beautiful shell. Though his fellow sea creatures can’t see it, it sends out vibrations which eventually cause other creatures to evolve eyes and to progress generally, making the mollusk a creator, of sorts.

These stories are more concrete than lots of them. There’s walking through space and playing games with atoms and galaxies. There’s a story about leaving a sign-but-not-really at the edge of space, then waiting 200 million years to see it again. The entire collection is glorious.

I put Calvino in the same category as Borges, though the former is much more accessible. Calvino makes my brain feel like it’s expanding, and Borges makes it hurt. In a good way, of course. Which means that if you like Calvino, you should give Borges a try. Both are a challenge, and I think they’re equally rewarding. Cosmicomics might be my favorite Calvino so far. I’ll get to all of them eventually.

While I was reading the last couple of books, Mardi Gras season came and went.

That’s exciting because it’s Mardi Gras but not as exciting as it could be since it’s Shreveport Mardi Gras. The highlight was the Highland Parade. We live a block from the route, so people tend to congregate here. We had a party a few years ago and an accidental party last year, and this year we had what I called a Not-Party Party. It turned out bigger than I expected, which was a good thing. Palmer grilled, I made a king cake, and we ate and drank with a bunch of friends. There was, of course, the parade.

It was a rainy one, but everyone had a good time.

Palmer even caught a hot dog (quite the coveted throw!), which I ate later that night.

He also made this fantabulous video about the event. It was a good time.

In other news, I went to the endo and somehow had a 5.7 A1c, which is amazingly good, especially since I was convinced that it’d be significantly higher than that. Here’s a photo of a cat and a misbehaving blood sugar: 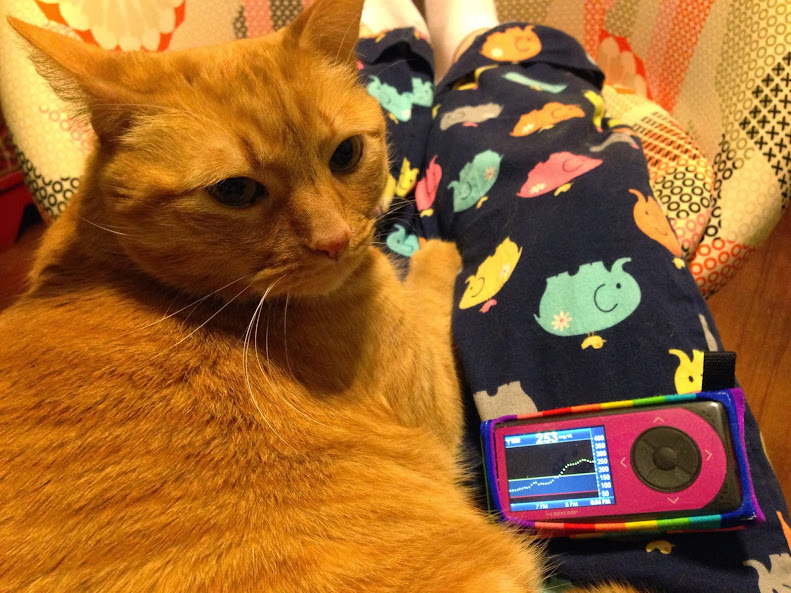 Now, to finish my next book, twenty-five pages of which are left. I made myself stop reading long enough to write this post, and I’m impressed at my self-discipline.