I don’t have much to say about A Dance with Dragons. It’s the fifth book in George R.R. Martin‘s A Song of Ice and Fire series, and, as I’ve said before, once you get this far into a series, there is no review without spoilers. I also find that until the last book, the farther I get in, the less I have to say. And these have been some long books.

Events off note and off the top of my head (again: spoiler alert): Tyrion made it to Pentos, had a time with Illyrio, ended up with Rhaegar’s son, Aegon, got picked up by a slaver after a hurricane, ended up a slave outside of Meereen, talked his way into the Second Sons, a group of sellswords. Oh, and Barristan Selmy started all of that business, trying to get back to Danerys. Who spent most of the novel sitting in Meereen and making stupid decisions, including marrying a nobleman and essentially agreeing to reverse everything she did after she overtook the city. After the wedding, a dragon shows up and whisks her away to parts unknown while the city goes mad. Good times. Arya is still in that temple, doing things. Meanwhile, in Westeros, Cersei gets her comeuppance and walks through Kings Landing naked and bleeding. I almost feel bad for her. There’s also Theon Greyjoy, who shows up alive and tortured, named Reek by Ramsay Bolton, who is arguably more twisted and evil than Joffrey ever was. Ramsay supposedly marries Arya, but it’s really Jeyne Poole, and she and Theon escape, finally running into his sister, Asha, who almost ended up dead, herself. On the Wall, Winter is Coming, and Jon Snow lets all of the Wildlings cross to the south so they can all fight the zombies together. Except at the end he might or might not end up dead, Caesar-style. Speaking of I-thought-she-was-dead, Brienne apparently survived being hanged at some point, and she’s run off with Jaime, who was no help to Cersei. Oh, and Bran is somewhere north of the wall, turning into a tree. The end.

This one took me longer to read than most of them, and I don’t think it was just because it’s one of the longer books in the series. I got a little bored at points – hence Inverted World. I stopped not too much farther in to read Oakley Hall’s Warlock, but I was more bored with that than with A Dance with Dragons, so I went back to the Martin. I think that I’m to the point that I’m not reading so much for enjoyment as to Get All the Spoilerz, which is unfortunate. I enjoyed it well enough, but I was more interested in who would die than anything else.

Remember how, in the early books, if someone died, he was probably actually dead? Like Ned Stark and Joffrey? I liked that. I’m tired of people supposedly dying and then showing up again in the next book. Catelyn Stark, by the way, did not make another mysterious appearance here. I am interested to see what’s going on with Zombie Catelyn. But Brienne? I thought she was hanged. And Theon should have been dead – though the life he has had lately is much worse. I bet Jon is still alive.

Which all means that I eagerly await The Winds of Winter, which will hopefully be published before George R.R. Martin dies. I wonder if he’s even finished writing it. The fourth season of the HBO show just started, but the only part I’ll be watching is Joffrey’s wedding because it should be fun, as, from what I’ve seen, the books are so much more interesting than the show.

In other news, it’s finally Spring! Palmer and I went to the Red River National Wildlife Refuge in Bossier for a little nature time. Of course we went in the middle of the day when the light was bad for photos, but here are some, anyway (and here’s the Flickr set):

I’m just realizing how little I’ve said lately that’s not about books. When Spring hit, our peach tree bloomed, and I took some photos of that, too. Here’s the best one:

We also had a little bit of a cookout, though we only invited ourselves.

A good time was had by all. Well, both. And, I guess, the cats. Who know what to do on rainy Spring mornings:

And, finally, after two years of terror, I finally went to the dentist to start fixing my teeth, which months of sugary saliva have made rotten. So far, I’ve been twice, and each time I go, I’m rewarding myself with a new Game of Thrones toy. So far, I have Ned Stark and Joffrey: 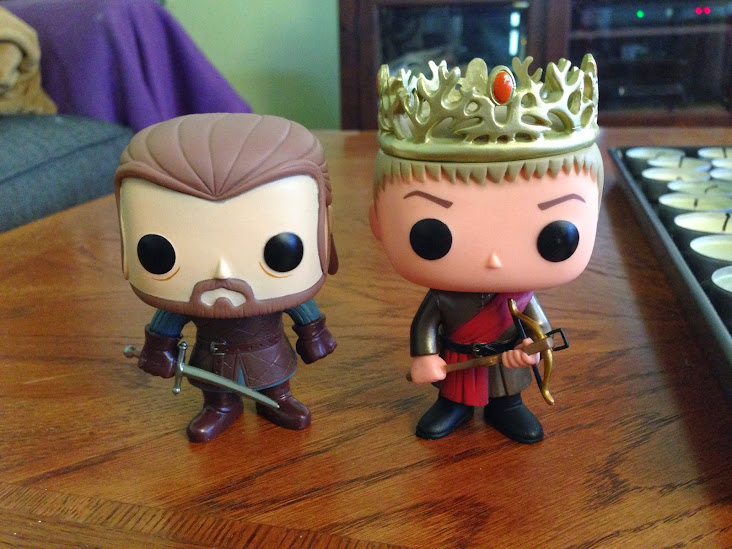 Next are Tyrion and Danerys, then maybe a dragon. I have enough dental work ahead of me that I’ll amass quite a few. Luckily, the only major thing I have to have done is a crown, which I would have needed with or without ye olde beetus.

In all of this picture-taking, I discovered that my good ol’ Nikon SLR needs a professional cleaning. I spent way too much time in Photoshop, removing blurry specks from the mirror or the sensor or wherever it is that I can’t get to. So for my birthday, I’m getting it cleaned. Maybe that will inspire me to pull it out more often.