Aaaand back to our regular programming.

I’ve been putting off reviewing The Flamethrowers since I finished it a few days ago because I wasn’t sure what to say about it. I think I have it straight now. Here’s the gist: It’s a really good book that could have been a Great book but got a little lost on the way.

I discovered this one because of a Facebook recommendation. After I finished Butcher’s Crossing, I had no idea what to read next, so I took a little nonfiction detour and posted my frustration with being in a Reading Rut. A couple old friends from high school suggested Still Alice and The Flamethrowers. I’d heard good things about both of them, but I started reading Still Alice first simply because I didn’t have to wait for a trip to the library to read it, as I had to do with The Flamethrowers. Anyway, I got about halfway into Still Alice when I discovered that it’s Not My Kind of Book (I talked about this in my review of The Cleanest Race) and moved on to The Flamethrowers, which Is My Kind of Book. Oh, yes.

It’s about a young artist and a twenty-two-year-old girl nicknamed Reno has moved to New York City because that’s where she thinks Artists are supposed to live. She’s from Reno (hence the nickname) and wants to go back to photograph land art. She starts dating Sandro Valera, an older artist who happens to come from the Valera Tires/Motorcycles Family in Italy. Sandro has distanced himself from his family for years, but he agrees to get Reno a super-fast bike so she can drive it really fast on the salt flats in Nevada to Pursue Her Art. She crashes said bike with only minor injuries and talks her way into the Valera camp to convalesce. Valera makes a special car that has clocked the land speed record of 700-something miles per hour across the salt flats, and their driver breaks the record again. The team talks Reno into attempting to break the women’s record in the same vehicle, which she does. The Valera family invites her to Italy for a publicity tour with the other driver. She really wants to go, but Sandro is hesitant because he doesn’t want to get back into the world of his family. Except he agrees, and they go to Italy, and Things Happen.

When I read the blurb on the back of the paperback, I thought, Motorcycles? Really? The Desert, of course, was a draw, and the recommendation came from someone whose reading taste I trust even after so many years, so I dug in. I could tell immediately that it’s a well-written, solid book, and it got off to a really interesting start along the lines of that amazing art museum scene at the beginning of The Goldfinch – though not quite as good. (Overall, this book is much better than The Goldfinch, by the way. Much more worth your time.) I was a little disappointed toward the end, though, because Rachel Kushner seemed to get a little lost in the backstory. There’s a whole long section about a messed-up story at sea involving a relatively minor character, and its excessive length made it seem like a separate story Kushner was determined to fit in. Scenes like that happen a couple of times, and I think that’s the novel’s biggest weakness. Like many books, it could have been shorter, but, in this case, only because of the long tangents that didn’t really have to be there. That’s why The Flamethrowers isn’t a Great book.

That said, I really enjoyed it, and I’ll definitely be reading more Kushner in the future. She writes My Kind of Book.

In Puppy News, Zelda continues to grow. We’ve been walking over two miles a day between two walks. She’s…improving.

She celebrated her first July 4th at a friend’s party!

She didn’t really mind the early fireworks until Palmer shot off a fifty-pack of Black Cats. She seemed to get over it, though, because the booms around here don’t seem to bother her. Which is fantastic. We took her home and put her in her kennel before it got dark, and she was fine when we got home a few hours later. No Poopocalypses were involved.

A good time was has by all.

Jacob took the Photo of the Night: 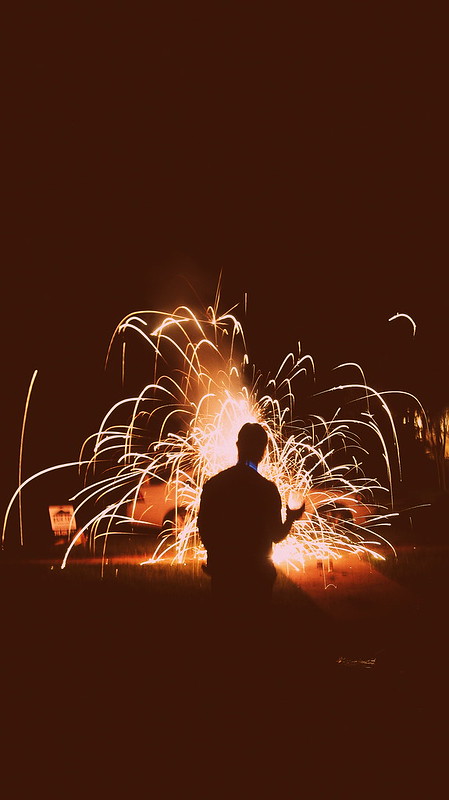 Meanwhile, in Puppyland, canine-feline relations are progressing very slowly. This is a regular occurrence in our household:

Shakespeare has spent most of his time hiding on our screened-in back porch, but yesterday he graced us with his presence on the top of the sofa.

Now that Palmer is home, I can hang out with him more, and I think that makes both of us feel better.